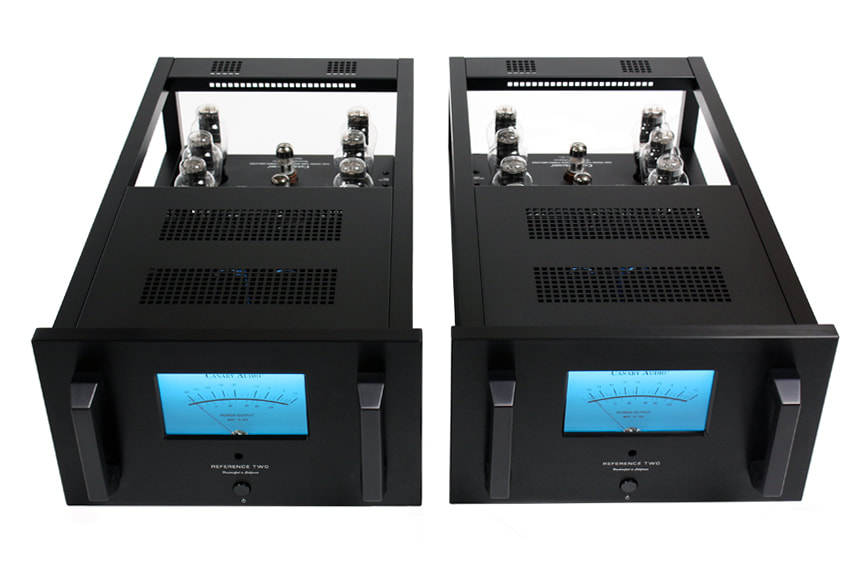 One of the best sets of amplifiers available. They have the musical magic of the 300B tube (one of the best audio tubes) along with the power and bass definition you don't normally get with 300B amps. They are massive, beautiful, powerful, and amazing. The sound quality is easily better than any solid state design and most tube designs as well. These are statement pieces. They have better transparency than any amp that I have tried here. Its like a veil has been lifted and I can hear everything more clearly. Without any harshness.

These are a demo pair with about 100 hours on them. Retail on these top of the line mono blocks is $48,000 with tubes. Once you hear these amps, you will stop looking for the next best thing--you will already have it! These amps are already a legend in Asia and England.

REFERENCE TWO Monoblock Amplifiers
The Best of the Best:

Canary Audio is proud to introduce the all new Reference Two Monoblock amplifiers, the first of a whole new series of high end reference audio products. The Reference Two is the result of over 15 years of experience. Built to Withstand the Power of Music: The REFERENCE TWO is a monoblock amplifiers with the use of sixteen (eight matched pairs) 300B triode tubes in a push pull parallel circuit. Like all of our other amplifiers, only the highest quality parts and components are used. The oversize custom wound power and output transformers are specially designed to extend the bass and highs. Each of the transformers is housed in a metal can filled with epoxy. Two independent chokes are employed for rectifier filtering on each channel. Just as important, the military grade epoxy circuit boards are designed to minimize component interaction. In addition to that, each of the 300B triode tube has a separate bias adjustment device mounted on the rear panel for convenient biasing. The World Most Powerful 300B amplifier: Generating power from eight pieces / four matched pairs of 300B tubes per channel.

The Reference Two is capable to deliver high power wattages and still maintains the clarity and delicacy of real music. Anyone who listens to them never feels the need for more wattage, all they want to do is put on more music. Perhaps the Reference Two is the most powerful 300B amplifier in the world.

The input circuit has been redesigned to be faster and more dynamic.